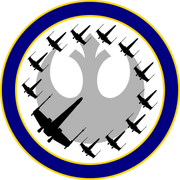 It’s been four years to the day since Star Wars fans were lucky enough to get not only a new X-Wing book but also a new book about Wraith Squadron. (Interestingly enough, if the first Wraith Squadron book were a person, it’d be preparing to go off to college right around now.) Star Wars: X-Wing: Mercy Kill was a wonderful book from the last years of the Legends universe that brought a lot of us back to the Star Wars fandom after we’d drifted away when our favorite characters were forced through some unfortunate plot lines. In fact, if you were to go aaaaaaall the way back, you’d see that a review of Mercy Kill was my very first contribution to Tosche Station and how I accidentally started writing for them. The X-Wing books have always been a lot more than that though. They were the basis of friendships, they were the foundation of many a sense of humor, and they brought of a heck of a lot of pure joy to people’s lives. The Wraiths though… well, let’s just say that the Wraiths have been so much more to me.

While I’ll always be a fan of Rogue Squadron, the men and women of Wraith Squadron will always have a far more special place in my heart. The Rogues were the best of the best. The Wraiths were a bunch of misfits on their last chance. The Rogues continuously battled their egos. The Wraiths were constantly at war with their own doubts, fears, and feelings of low self-worth. The Rogues’ motto was about how they were the best. The Wraiths’ highlighted their out of the box thinking. The members of Wraith Squadron were all so relatable and fully realized with their own struggles and strengths that I can truly say that I love all of them. Well okay except for Castin. And Grinder. But especially Castin.

Over the years, I’ve gone back and forth over which Wraith I cling to the most closely. In my teenage years, it was Kell Tainer because hello explosions! After that, it was Shalla and then Tyria and then Face and then Kell again and then why hello Myri Antilles. Lately, it’s been Lara Notsil although she’s probably neck-and-neck with Face right now. The change hasn’t been because I love any of these Wraiths any less. It’s because I’ve been able to find strength for myself from each of them when I’ve needed it most. If Face’s service record can reflect [REDACTED] and he can become the Wraiths’ leader than there’s no reason why I can’t hope to soar in my professional career. If Lara can survive being isolated with no allies in the Empire except for an Artoo unit and still help take down Zsinj then I can endure despite a work environment where leadership is against me. After all, I’ve even got BB-8 on my desk, poking his head around my pen holder. If there’s one thing I can take from all of my Wraiths though, it’s a sharp sense of humor because yeah, laughter really does help get you through the darker days.

Love and appreciation for the X-Wing books is nothing new to the fandom. They are classics for a reason and not just because they remind us that heroes are far more than just the Jedi. The Wraiths remind us that even those who feel like they’re out of chances and out of people to believe in them can still become something.  They just take that concept and run straight to Coruscant with it, just like they run with everything. So thank you, Mr. Allston. You may have been taken from this world far too soon but your writing and your characters continue to have a lasting, positive effect. Thank you for not only writing delightful books that mean so much to so many of us but for also giving us characters that we can relate to and find inspiration in during our rougher times.