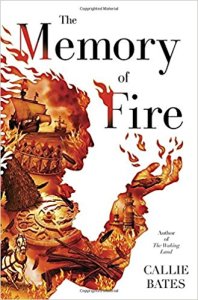 In the sequel to her pretty awesome debut novel, Callie Bates takes us back to that same world but adds a twist: this time we’re headed to the Imperial Court in Paladis and instead of staying with Elanna, we get to know her lover Jahan a little better as he returns the court in hopes of persuading the Emperor and Crown Prince to treat with Eren’s new Queen Sophy instead of starting a war. But things have changed since Jahan left Paladis and he may not longer have the status and influence he once enjoyed. Oh and those witch hunters? Yeah, they’re definitely going to be a problem.

If you enjoyed The Waking Land, The Memory of Fire is certainly a book that you’re going to want to pick up. Bates has a talent for weaving a good tale and for creating fully realized cultures. She’s especially good at defining her magic systems and how to differ from one another but can also work together.

That said… I wanted to like The Memory of Fire more than I did. I really really did. The problem is that everything I really loved about The Waking Land is more or less missing from the sequel and much of that stems from being inside Jahan’s head instead of Elanna’s. While I liked Jahan well enough in the first book, he and his romance with El were not what made that novel special for me. However, I recognize that this is a personal problem that I have engaging with the book and not necessarily a flaw. This isn’t the first series to change up first person narrators from book to book and neither will it be the last.

If I separate my feelings on this book from how it related to The Waking Land, I did enjoy reading it. First person male narrators aren’t usually my first choice but Bates does make it work with Jahan. He’s had to go through a lot in his life and that’s not even including everything that happened to him after meeting Elanna. We learn that as a child, he and his brothers essentially forced into magic by a sorceress named Madiya and that his mother’s efforts to intervene ultimately resulted in her death… or so he thinks. This is a book of change for Jahan as he has to navigate not only personal relationships that are different from what he once thought but also a country that just might be on the verge of revolution for the better if they can live long enough.

The Memory of Fire doesn’t quite soar to the heights of its predecessor but is still a fun and enjoyable sequel. It could have used a lot more Elanna but it’s entirely possible that won’t be an issue for some readers. Bottom line: if you like the first book, give this one a try. If you haven’t read The Waking Land yet, go do that first.

Thank you to Del Rey for providing an advance copy of the book for review purposes.