Happy Bonds of Brass Day!!! If you follow me on Twitter or if you read the previous post here, you likely know that I loved the heck out of Bonds of Brass by Emily Skrutskie. Having read the author’s previous novel, Hullmetal Girls, I was immediately intrigued about this book just based upon the initial description from Del Rey and had been anticipating it ever since. I was lucky enough to get an advance review copy of the book back in September and have been screaming about it to anyone who will listen since then. (I’d apologize to my friends who had to hear me flail about it a dozen times but I’m not actually sorry.)

Listen: sometimes, what you really need in your life is a book that makes you yell a lot and that makes your heart happy and Bonds of Brass makes my heart very, very happy.

Since I love this book so much, it seemed appropriate that I write something about it for today. Could I write an actual review? Sure but what would be the fun in that? Therefore, I present (in no particular order) my Top 7 Reasons you should pick up this book TODAY! END_OF_DOCUMENT_TOKEN_TO_BE_REPLACED

Is the world a mess right now? Yup. Are a lot of us about to have more time in our hands? Also yup. Should we use at least some of that time to read new books and support indie bookstores? HELL TO THE YUP.

(I have had a lot of caffeine and I always have a lot of feelings about books.)

I am admittedly not quite as good as I should be about writing actual reviews of the books that I love unless they’re Star Wars which is bad because there are so many good books out there! With everything happening, a lot of authors and independent bookstores are going to be hurting for a bit so I thought the least I could do was tell you about some of the books being released in the first half of this year that I’ve either read and loved OR that I’m excited for. To make it even easier, I’m putting order links by each title. One is so you can buy them directly through One More Page which is an indie bookstore near me in the DC area that I love with all of my heart. The other is for IndieBound which lets you either support the entire network of indie stores OR sends you to the website for a store near you based on your zip code.

Okay on to the books starting with…

2020 Releases I Read And Loved!!! END_OF_DOCUMENT_TOKEN_TO_BE_REPLACED

I think I’ve been waiting for Queen’s Shadow and The Afterward most of my life but didn’t how badly I needed them until last week.

Ever since E.K. Johnston’s forthcoming books were announced, I’ve been beyond excited for both novels. After all, I was already predisposed to love them given their strong emotional ties to my childhood. From the moment I watched The Phantom Menace, I’ve been enamored with Padmé Amidala and her handmaidens. To a nine year old, a band of teenage girls kicking ass and fighting for their homeworld and wearing gorgeous outfits while doing it looked like the dream. I wanted to be one of them. Queen’s Shadow finally gives Naboo’s loyal daughters the spotlight and it only took twenty years. I’m equally in love with high fantasy and stories about lady knights and read as many as I could get my hands on growing up. David Eddings, who specialized in high fantasy and the delightful use of tropes, has been one of my favorite authors since I started reading his books and, well, let’s just say there’s a very good reason we’re rereading his Elenium trilogy ahead of The Afterward’s release. END_OF_DOCUMENT_TOKEN_TO_BE_REPLACED 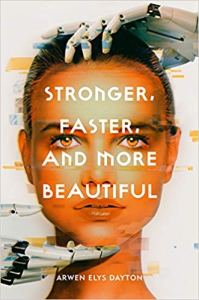 In all honesty: I had no idea what to expect when I first opened Stronger, Faster and More Beautiful by Arwen Elys Dayton. The cover features a woman’s face with robot hands which instantly intrigued me and made me think “robots are involved, great!” But then the copy on the inside cover flap felt more like a concept than an explanation so I decided to just go ahead and turn to the first page and start reading. Four pages later, I was hooked and almost didn’t put the book down so I could make it to work on time.

Stronger, Faster and More Beautiful is six connected stories exploring what it means to be human in a world where technological and medical advances keep moving forward and let us repair, enhance, and change our fleshy forms. They start out simple enough in our not so distant future. A young boy receives organs from his sister. A teenage girl is part mechanical after being reconstructed after a car accident. The daughter of a reverend with a change of heart has to try and figure out her own life. And then it starts to get a little stranger as we move much further into the future. A genetically modified boy isn’t quite human. A man who was unwillingly modified to be a part-robotic slave runs for his life in Russia. And finally… two teenagers who are what used to be human in a world that uplifts the genetically modified try to figure out what to do when their entire world changes. Each story builds upon the world established in the one prior and moves us further into the future. They could all be read alone but together they form something special.

Admittedly, I didn’t love every story as much as some of the others but every one of them made me think and wonder if this is really the path that humanity in the United States might take. That’s part of what makes this book disturbing at times. While the final story feels a little outlandish with the state of the world, the five prior make its scenario totally plausible. In all honesty, I’m not sure how I feel about how things wrap up but I can understand and respect how Dayton got there which is ultimately more important. My favorite of the stories is probably the second one where Milla struggles with what her body has become in a world where this isn’t considered normal yet. Give me all the partially robot girls and their internal struggles with trying to still feel human.

Ultimately, Stronger, Faster and More Beautiful is one of those books that’s hard to discuss without spoilers because each part is an experience. If you’re interested in a look at the potential path of humanity from an intimate and personal level, this is the book for you. If you’re even mildly intrigued by this book, pick it up. I highly doubt you’ll regret it.

Wunderkind PR/Delacorte Press provided a copy of the book for review purposes.